In November 2017 various cases of Legionnaires' Disease were reported in California, possibly linked to Disney. Cases like this serve as a reminder of the issues with Cooling Towers and how crucial it is to manage the risks they bring, in this blog we consider what some of these issues are and touch base on the management approaches available.

Can you find Legionella in cooling towers?

Cooling tower systems are a well-documented source of Legionella contamination and as such are considered to have high inherent risk – considering that; water within these systems will be between 20-45⁰C - by virtue of the cooling process, which also aerosolises water (evaporative cooling) and there is potential for stagnation.

Therefore, these aspects combined – support the growth and proliferation of potentially harmful Legionella bacteria. These systems are designed to cool often large volumes of process water used for refrigeration applications as well as large scale industrial plant (power stations). As such, these processed waters are not wholesome and often contain waterborne bacteria.

Why did Disneyland close it's cooling towers?

It was reported that twelve people had been colonised with Legionella bacteria whereby the identified source of contamination was the nearby cooling towers. Of the twelve people affected by this pathogen, one man died and it was commented that this individual also had underlying health issues.

Furthermore, of the twelve people affected by this bacteria, three (including the man that died) lived in the City and were not visiting the Disneyland attraction. Ten of the twelve individuals affected were also between the ages of; 52 and 94, which further supports the theory that middle-older aged individuals are at greater risk of disease caused by harmful Legionella bacteria – due to immunosenescence (changes in the immune system – associated with age). Co-morbid disease or underlying respiratory problems also increase the risk of acquiring infection or disease associated with Legionella bacteria (Pontiac fever, Legionnaires Disease), due to the ‘host defences’ having already been weakened.

What Legionella guidance is applicable for cooling towers?

That said, there are well documented mechanisms of control detailed in HSG274 Part 1 which describe; design considerations and the commissioning process for cooling tower systems, as well as the importance of an effective water treatment programme (including the use of ‘suitable’ biocides) and the importance of maintaining and cleaning such systems – in order to help keep the level of microbial contamination within safe limits.

There are a range of evaporative cooling systems that use the method of evaporation to cool water which include; cooling towers, evaporative condensers and dry/wet coolers or condensers and whilst the infrastructure of these systems vary, the principles of suitably controlling these systems are very similar and are centred around; maintaining an effective water treatment programme, system-specific monitoring of the systems to ascertain cleanliness and the level of fouling and ensuring that such systems are suitably cleaned or even drained and shut down – following a period of no use (>1 month) in order to mitigate the risk of stagnation and associated contamination with biofilm bacteria.

How should cooling towers be managed?

From an operational perspective, evaporative cooling systems should be kept in regular use whenever possible. If a system is to be used intermittently, then provisions should be made to ensure that treated water circulates throughout the system and that this is carefully monitored and recorded. Furthermore, if a system is to be out of use for a week or longer, but no longer than a month, then biocide should be dosed and circulated throughout the system on a weekly basis.

The efficacy of the adopted monitoring, cleaning and water treatment programme can be measured with microbiological analyses whereby dip slides may provide a total viable count (TVC) or information relating to the heterotrophic (general) bacterial load within the system sampled.

Whilst TVC analyses provide an indication for the general level of microbial contamination within a cooling tower, it’s also important to ascertain whether Legionella bacteria also exist within such systems and if so, then to what extent.  The following table (1.10 HSG274 Part 1 ) describes action levels in response to Legionella bacteria counts:

Monitoring, cleaning and checking the efficacy of the water treatment programme are key considerations for ensuring the safe operation of evaporative cooling systems and from a fouling perspective, particular focus should be given to inspecting; the cooling tower base (pond), the cooling tower pack, distribution troughs and spray nozzles and drift eliminators (last line of defence…).

Whilst significant fouling of these areas may impact on the cooling efficiency and integrity of these systems, this will undoubtedly also give rise to increased microbial growth/contamination within these parts of the system which may pose a significant risk to public health – especially if the drift eliminator systems are faulty or inefficient, as this may permit the spread of aerosolised water (plumes) containing Legionella towards the general public – depending on the direction of the prevailing winds...

Of the eighteen cooling towers within close proximity to Disneyland in California, two were compromised and found to be colonised with harmful Legionella bacteria resulting in the shutdown of these systems whilst they were disinfected.

These towers were recommissioned but shutdown again shortly after due to recurring Legionella colonisation, thus supporting the theory that ‘prevention is better than cure’, as once biofilm bacteria such as Legionella take hold within such a water system, it’s almost impossible to eradicate and therefore requires regular monitoring to ensure that bacterial counts remain within safe limits and that these systems operate as intended – with minimal risk to public health.

Editors Note: The information provided in this blog is correct at date of original publication - December 2017.

Water Safety & Legionella: How to improve your record keeping?

In our recent blog What are 'Good Records' for water safety? we learnt what water safety records are, why we need to keep them, and how to make them “good”.  In this blog, we discuss ways to...
END_OF_DOCUMENT_TOKEN_TO_BE_REPLACED

Commonly, Legionella risk assessments do not consider the risks from microbial hazards such as Pseudomonas aeruginosa (P.aeruginosa) and other waterborne pathogens.
END_OF_DOCUMENT_TOKEN_TO_BE_REPLACED 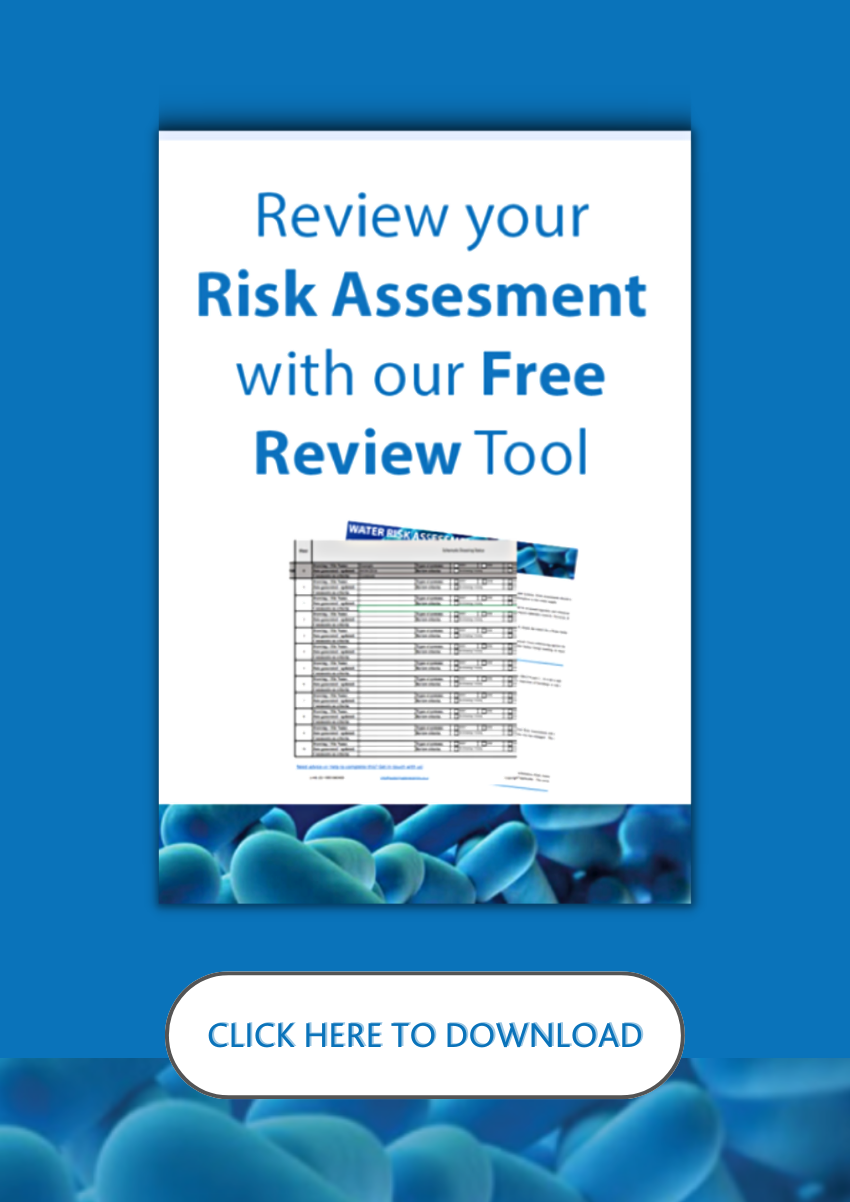