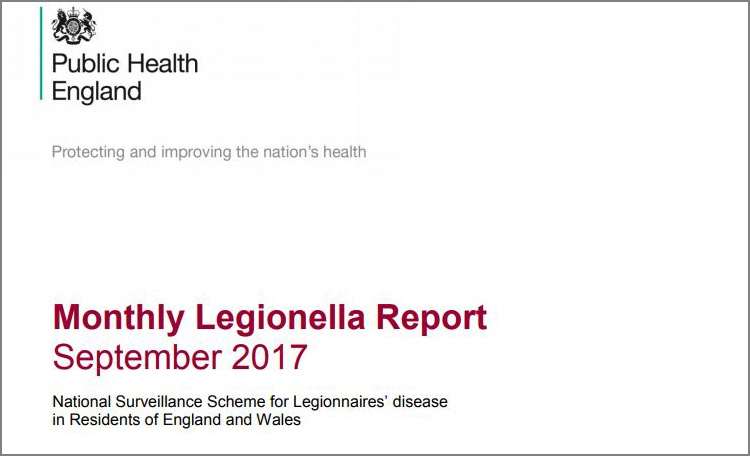 According to the most recent surveillance data (accurate as of the 14th October 2017) reported by Public Health England – detailing the number of Legionnaires’ Disease cases reported and confirmed to date, a total of 77 cases were reported in the month of September 2017, which means that 522 cases of Legionnaires’ Disease have been reported in total since January 2017.  Therefore 26 more cases have already been reported compared the whole of 2016 (496 cases reported between 1st January 2016 and 31st December 2016).

Whilst it’s unequivocal that our surveillance measures are continually improving, thus helping to accurately identify more cases of the disease, this also identifies that more work can still be done to mitigate the risk of people being infected by harmful Legionella bacteria – causal to the development of Legionnaires Disease.  The Health and Safety Executive (HSE) consider Legionnaires’ Disease to be a ‘preventable disease’ and as such, Duty Holders and Responsible Persons (RP’s) have legal responsibility and accountability to ensure that occupiers of their premises are suitably protected against waterborne pathogens such as Legionella. Failure to do so may be considered a breach of health and safety law (under the Health and Safety at Work etc Act 1974), which may lead to organisations receiving formal improvement notices from the HSE – to suitably address non-conformances with their estate (possible best case scenario…).  However, if individuals contract Legionnaires Disease from a poorly managed water system, then the organisations or those in charge of these systems, may receive a financial penalty or even imprisonment – should a negligence claim be successful and it’s beyond all reasonable doubt that the root-cause of the problem is the water system.

The surveillance results to date and year on year comparison of these results, still identify that the majority of confirmed Legionnaires Disease cases are associated with Travel or from being Community-acquired, whilst the number of hospital-acquired (nosocomial) cases remain comparatively low. This isn’t to say that the nosocomial statistics are good, as the small number of confirmed cases obviously highlight a loss of control within certain health estates and one must also consider that mortality rates are ~3 times higher with nosocomial Legionnaires Disease than with any other source (≥30%)!  As previously discussed, ultimately Legionnaires Disease is considered ‘preventable’, so even 1 case is 1 too many!!  It’s important to report such surveillance data to the established WSG – as a point of information, as this continues to remind members of the importance of water safety - as it pertains to Legionella management and moreover, the potential consequences of poor water management in this regard.

ACoP L8 and HSG274 Part 2 offers very prescriptive guidance on how to suitably manage potable water systems and as such can be used to help shape your water safety plan and policy when coupled with the professional services offered by authorising engineers (AE).  AE’s can be commissioned to complete a wide range of water safety services including but not limited to; water safety plans and policy, risk assessment reviews, health and safety training, staff appraisals - when auditing competencies and therefore can form an integral (but fully independent) part of the communications pathway within an organisation, thus serving as a critical support where the suitable management of waterborne bacteria is concerned.

Editors Note: The information provided in this blog is correct at date of original publication - Novmber 2017.

For several years as an organisation, we have worked with Property Management Companies on various projects and our team members have carried out various tasks to support these companies, both...
END_OF_DOCUMENT_TOKEN_TO_BE_REPLACED

As 2021 finally draws to a close and the festive season is now upon us, we would like to share with you some Christmas cheer with some hand drawn cards by our Project Consultants daughter Molly,...
END_OF_DOCUMENT_TOKEN_TO_BE_REPLACED